Sea-Band provides drug-free nausea relief choice without causing drowsiness or other side effects!

Sea-Bands are really simple to use, the only complicated part is the correct positioning of the plastic stud. As they explain, “Sea-Band is a knitted elasticated wrist band, which operates by applying pressure on the Nei Kuan acupressure point on each wrist by means of a plastic stud. Place your middle three fingers on the inside of your wrist with the edge of the third finger on the wrist crease. The Nei-Kuan point is just under the edge of your index finger between the two central tendons.” For them to work, you have to wear a band on each wrist. 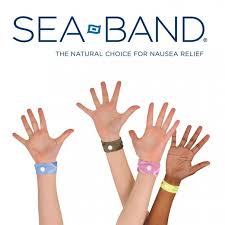 My 11-year-old has been complaining that he gets car sick, especially over the summer when we would go on long car rides. I had used the Sea Bands when I was pregnant with him for nausea and they worked on me. So I decided to reach out to Sea-Band to try them out for my son. He has had the chance to use them several times. We keep them in the car for when he feels car sick. I hate giving my kids medicine so when I find something that helps without the use of medicine I have to share. Not only are these great in helping with car sickness, but they can also help with morning sickness, post-operative and chemotherapy-induced nausea.

RELATED:  Bath Bombs For Your V!

Buy It: Pick up one of these bands at Sea-Band and Amazon. Sea-Bands come in both child and adult sizes.