From the Oscar-winning visual effects team that brought to life the worlds of Avatar and Lord of the Rings comes revolutionary new ground – a CGI ape that delivers a dramatic performance of unprecedented emotion and intelligence, and epic battles on which rest the upended destinies of man and primate: RISE OF THE PLANET OF THE APES 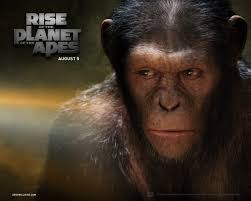 James Franco stars as Will Rodman, a neuroscientist living in San Francisco trying to develop a cure for Alzheimer’s disease by testing on chimpanzees, giving them a human level of intelligence.  After a test subject’s baby, Caesar, is orphaned, Will decides to raise him at home on his own with his Alzheimer-stricken father, John Lithgow.  What begins simply as a continuation of his experiment quickly turns into a problem for Will, as Caesar is taken away from him and forced to live in a primate facility.  As Caesar’s intelligence continues to grow, he begins to stake his claim as the leader of his new primate counterparts, which will ultimately lead to the RISE OF THE PLANET OF THE APES.

Our Take: We watched this on Christmas Day as our downtime from all the excitement. This film is a prequel to the 2001 release of Planet of the Apes, which my kids have not seen. I remember seeing it only because Mark Wahlberg was in it! We remembered seeing commercials for Rise when it came out to the theater but we never saw it or read any reviews on it. The visuals were amazing! The film was made using computer-generated imagery (CGI) to create the apes. Director Rupert Wyatt mandated that Rise of the Planet of the Apes not use any real apes during filming and worked with Weta Digital to create lifelike apes through revolutionary visual effects. This I thought was amazing because I thought some of the apes were actually real. I was a bit surprised at the ending, thinking this can’t be the end. My son looked at me and said “that’s it?!?!” Now come to find out that there is a sequel, it makes more sense. We are still mad since it was totally unexpected but now we can’t wait to see the new movie!

The RISE OF THE PLANET OF THE APES  Blu-ray is loaded with bonus material including deleted scenes, making-of featurettes commentaries, and more.

RISE OF THE PLANET OF THE APES Blu-ray + Digital Copy

o   Will Ignores the Risks of an Airborne Mutated Virus

o   Rocket Gets Hosted by Dodge

·         Breaking New Sound Barriers: The Music and Sound Design of Rise of the Planet of the Apes

Stay Connected: Visit Rise of The Planet Of The Apes on Facebook to Create a Custom Poster and unlock a secret video clip!

Disclosure: I was provided with a product for this review. All views and opinions with regard to the products or the company are my own and were not influenced by the company.

👻🔎 Guess who’s joining the gang to help solve the next mystery?

Fun Fact: Scooby Doo Where Are You premiered on September 13, 1969. Who is your fav… Velma, Fred, Daphne, Shaggy, or Scooby?

💪🏻🧇Protein power waffle sticks! What is your favorite waffle topping? ⠀
⠀
Today is “𝐍𝐚𝐭𝐢𝐨𝐧𝐚𝐥 𝐖𝐚𝐟𝐟𝐥𝐞 𝐃𝐚𝐲”! So I’m sharing some sweet goodness & sending the fun over to @Kelly_Reci_. Visit their post to see who they’re sharing the love with. Join the tour by clicking on each handle until you get all the way back to my post! Let us know if you did!⠀
⠀
Thanks to Dash, my son can make all the  protein waffle sticks he wants! Between the waffle stick maker, egg bite maker, the griddle and the waffle maker we are always using a Dash! Find out more with link in bio.⠀
⠀
#cutefettiloops #nationalwaffleday #waffleday #bydash #waffles #proteinwaffles

Disney and Pixar’s "Luca" on Digital Format: link in bio!

How To Enter:
1️⃣ LIKE this Pic
2️⃣ FOLLOW @thereviewwire, @chattypattysplace & @lisaehrman
3️⃣ Leave a COMMENT on your favorite scene or character if you have seen the movie
*BONUS: get extra entry for each friend you tag in separate comments.

The giveaway is live until 9 pm EST on Aug 22nd, 2021. IG Account must be public. Giveaway is not endorsed by nor the responsibility of Instagram. Prize fulfillment is the responsibility of Disney. Void where prohibited. Open to U.S. residents of the United States. Must be 18+ years old to enter. 1 Winner will be selected randomly.

🍫🔥Do you eat your S'more with something other than the traditional milk chocolate and marshmallows?⠀
⠀
Today is “National S’mores Day” so I’m sharing a tasty treat & passing the torch to @LauraOinAK. Be sure to check out their post and see who they’re sharing the s’mores love with. Join the delish tour by circling all around until you get all the way back to my post! Let us know if you did!⠀
⠀
Visit thereviewwire.com, search "smores" and you will find a recipe for S’mores Fondue Slow Cooker Style! ⠀
⠀
#recipeoftheday #slowcooker #cutefettiloops #nationalsmoresday #nationalsmoresday🍫🔥 #smoresday #smores #smoresseason #camping #smoresdip #bonfire

🎄What is your all time favorite Christmas movie?⠀
⠀
Today is “ℂ𝕙𝕣𝕚𝕤𝕥𝕞𝕒𝕤 𝕚𝕟 𝕁𝕦𝕝𝕪”! 🎅🏻 Ready for some very merry fun!? Check out my post and then dash through the summer heat over to @kelly_reci_. See who they’re sharing the festivities with. Join the tour by clicking on each handle until you get all the way back to my post!⠀
⠀
Check out all 31 movies that you can watch for free with Prime at thereviewwire.com, then search ‘Christmas in July’. 🎄⠀
⠀
#christmasmovies #amazonmovies #moviesuggestions #amazonprime #cutefettiloops #christmasinjuly2021 #christmasinjuly #christmasinjuly🎄

This DERMAPORE removes dirt and grime from your pores, before infusing your favorite skincare products. This home spa treatment is based on professional dermaplaning.

After a few sessions, I noticed a difference, especially on my nose, the blackheads seems to disappear. Following use, my skin did become a bit red, but it cleared up pretty quickly. I am stunned that with all the gunk that comes out with each use. This is now part of my weekly face care routine!

Learn more about #Dermapore with the link in bio.

🎁 I received this fantabulous curated gift box from #shopbeneboon! This is the WFH Set, such a beautiful collection. ⠀
⠀
🥳Today is “𝑯𝒂𝒑𝒑𝒚 𝑩𝒊𝒓𝒕𝒉𝒅𝒂𝒚 𝒕𝒐 𝒀𝒐𝒖” Day, so I’m grabbing my party hat & kicking off the celebration with @cutefetti. Check out their post & see who they’re sharing the 💕 with. Join our 𝐛𝐢𝐫𝐭𝐡𝐝𝐚𝐲 𝐭𝐨𝐮𝐫 by circling all around until you get back to my post! Let us know if you did! 🎉⠀
⠀
These artfully arranged gift boxes are filled with the finest quality, responsibly-made, and useful items to indulge in and elevate busy, everyday lives! To read more visit thereviewwire.com and search ‘gifts for her 2020’.⠀
⠀
Includes:⠀
•"Paper Bag" Storage by #Uashmama⠀
• Handpainted Notebook by #Moglea⠀
• #ColorBlock Paper Pad by Moglea⠀
• Geo #Bluetooth Speaker by #Xoopar⠀
• 10-Minute Incense Matches by #Hibi